You are here: Home1 / ABOUT

SHARE is a registered charity, founded in 1970 by students from Presentation Brothers College, Cork, who raised funds to try and make existing housing for Cork City’s vulnerable elderly more comfortable. One of the most well-known elements of the fundraising over the past 50 years is the SHARE Christmas campaign which includes the the annual 24-hour fast and the blessing of the crib in the city. It has become a tradition of the festive season in Cork and the crib is staffed by students right up until Christmas Eve to encourage people to donate to the worthy cause.

The late 1960s was a time of change as much in Ireland as in the rest of the world. Where many saw this as a time of crisis, others saw it as an opportunity. Against this backdrop of societal change, a workshop on Christian Leadership was organised by Br. Jerome Kelly, Headmaster of Presentation Brothers College Cork in 1970. The workshop accommodated the students during the school day and their parents at evening time, with the entire exercise being facilitated by former communist and editor of The Daily Worker, Douglas Hyde. In his role as facilitator, Douglas Hyde sought to dispel misconceptions, identify  causes of frustration in the world around them and channel the participants’ energies and ideas into reaching out to people in need and being a catalyst for the change they wanted to see. He appealed to their “obvious idealism” and focused their attention on immediate practical realities.

At the end of the three-day workshop, senior students went out into the city, in twos and threes, to witness with a fresh perspective,  the realities facing people in the community and  then to determine a way of how to address the social issues being faced. There, they discovered that overwhelmingly, it was the older people in the community that were facing the greatest disadvantage, living in poor conditions and experiencing loneliness and isolation.

SHARE (Students Harness Aid for the Relief of the Elderly) was a direct outcome of that workshop, founded by Brother Jerome Kelly and run by the students who set about overcoming these problems and whose legacy continues to this day.

The organisation has evolved and grown over the decades and is now responsible for a wide range of services for older people in the Cork community. SHARE provides supported independent living in their 140 comfortable and secure housing units across seven different locations which are overseen on an ongoing basis by SHARE personnel. The charity piloted a dementia outreach programme which sees vetted adult volunteers and students visiting people living with dementia. They also have up to 125 daycare centre clients, for whom they provide medical and social support services.

Other social engagement actions regularly take place such as weekly visits between students and older people as well as activities in the day centre. One example is their annual Christmas party held in the centre on Sheares Street as a chance for people from different SHARE complexes to gather and celebrate Christmas.

Of course, true Christmas spirit is felt on the streets of Cork City every Christmas, as hundreds of students from schools across Cork don the familiar yellow jackets,  rallythe troops for the annual SHARE fundraising effort,volunteering in all weather conditions to collectmuch-needed donations.

As the key fundraising event of the year for SHARE, its results are vital as all contributions received  are directly used to support the running of SHARE each year. 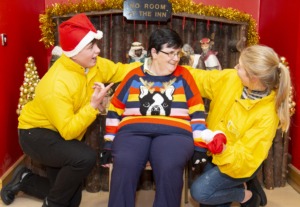 SHARE’s 140 housing units, located around the City, are comfortable, secure and homely, and are overseen by experienced, caring SHARE personnel on an on-going basis.

The continuous maintenance and running of SHARE’s homes, situated around the City at Blarney St, Shandon St, Blackpool, Grattan St, Sunday’s Well, Abbey St and Sheare’s St, is an ongoing commitment for SHARE – a commitment all members of SHARE are happy to undertake, to ensure residents can live their lives in peace, comfort and security.